Considering the 1990s was the UN International Decade of Natural Disaster Reduction, great strides have been made in challenging the ‘naturalness’ of disasters. Crucially, the IPCC has spotlighted the effects of human-induced climate change on exacerbating natural hazards and weather extremes. In the wake of recent floods so big they can be seen from space, Pakistani officials called on countries in the Global North to pay reparations and compensation to countries like Pakistan, who produce less than one percent of global greenhouse gas emissions, and yet are disproportionately affected by climate change.

As such, today it is more widely accepted that disasters occur at the intersection of natural hazards and socially and politically-produced vulnerabilities. These advances in our collective understanding are important in informing approaches to disaster risk reduction as we observe the International Day of Disaster Risk Reduction (IDDRR) on 13 October; there is, however, still a need to consider more deeply how the ongoing history of colonialism has produced and unevenly distributed the sociopolitical vulnerabilities that see some countries trapped in a reproductive cycle of disasters.

Failing to pay attention to the social and political influences on the disaster landscape limits how we understand the story of so-called ‘natural’ disasters. In their pivotal 1994 book At Risk: Natural hazards, People’s Vulnerability and Disasters, Piers Blaikie, Terry Cannon, Ian Davis, and Ben Wisner created the ‘Pressure and Release’ (PAR) model to capture that underlying factors and root causes among certain groups produce ‘dynamic pressures’. These dynamic pressures can lead to disastrous outcomes when they coincide with natural hazards. Through this model we can see that disasters are determined not by nature, but by social systems that create vulnerabilities. This explains why disasters are felt differently even within the same country. For example, during the floods that characterised Thailand’s monsoon season in 2011, the western and northern outskirts of Bangkok were more heavily affected by flooding than the city’s inner areas – despite lying at similar elevations – as a result of a lack of flood-resistant infrastructure and poor planning by the city’s local political elites.

Moreover, historical disempowerment of local methods of disaster tracking has hampered communities’ capacities to cope with disasters – an important consideration for the theme of this year’s IDDRR, early warning. In Puerto Rico, for example, indigenous Taíno forms of hurricane tracking that were able to detect hurricanes four days prior to landfall through cloud and ocean monitoring were outlawed by Spanish colonisers who deemed these practices to be witchcraft. Delinking disasters from their social context and social histories leads to the danger of obscuring the reasons behind the uneven impacts of disasters, and how disasters have come to have such catastrophic outcomes for countries dealing with the consequences of colonialism.

Let’s consider Patrick Wolfe’s statement that ‘invasion is a structure not an event’ and apply it to our understanding of disasters. While Wolfe was referring specifically to settler colonialism, the structural imprint of colonialism on former colonies remains visible today. Although they may gain independence and their colonising forces may ‘leave’, many former colonies remain in a state of what Caribbean Marxist scholar Norman Girvan refers to as ‘incomplete decolonisation’, wherein a country’s postcolonial development is determined not by its own communities and civil society but by former colonial powers and foreign private capital. As such, colonialism has morphed into other forms of control under the guise of the ‘civilising mission of development’ that ultimately stifles the self-determination of states striving for independence. Think of the PAR model conceived in At Risk: disasters are not the cause of disruptions in prevailing conditions but rather the product of the status quo, with the status quo in question a result of colonialism and its successors. A strongly criticised example of this is the implementation of neoliberal structural adjustment programs from the 1970s to the 1990s, whose conditions of economic assistance both increased exposure to environmental hazards and hampered the ability of governments to cope with the aftermath of disasters due to weakened social services. When thinking of how to improve disaster risk reduction, it is important to consider how neocolonial interventions have exacerbated natural hazards and impacted communities’ resilience so that we don’t contribute to reinforcing the legacy of colonialism.

Colonialism in the disaster landscape

The global disaster landscape reveals how colonial legacies continue to shape countries’ capacities to prepare for and respond to disasters. Similar to how we think of disasters as being the culmination of natural hazards and social vulnerabilities, the structure of colonialism regenerates in conjunction with specific social, political, and environmental aspects of different former colonies. This explains why some countries, such as Haiti, have heightened risks and experience more severe disasters. Haiti is located in a storm-prone region in the Caribbean hurricane belt, yet it has more disasters per km2 than the average of its Caribbean neighbours. This can be partly explained by its location on the fault line between the North American and Caribbean plates, and its exposure to floods and landslides due to widespread deforestation. These hazards alone, however, do not explain why Haiti experiences frequent and catastrophic disasters. 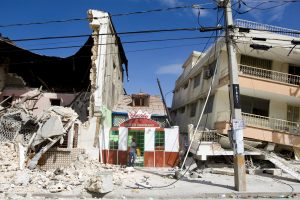 Take New Zealand, another island nation situated on a fault line. While both countries experienced 7.1 magnitude earthquakes in 2010, both in close proximity to urban centres, the 12 January earthquake that struck just west of the Haitian capital Port-au-Prince killed 316,000 people according to Haitian government estimates, or 240,000 according to many donor estimates, in contrast to New Zealand’s 7.1 magnitude earthquake in September 2010 that saw two deaths. As a settler colony, British colonisers in New Zealand implanted and erected a new society on stolen Māori lands. As such, the country did not see the high volume of environmental and economic degradation that Haiti did as a planter colony being used to finance the French Empire through the harvesting of timber, sugar, and coffee. This demonstrates that environmental hazards are not the sole determinant of disasters, but rather require the compounding of other historical factors to create a catastrophe.

Just as invasion is not an event, the impacts of colonisation cannot be undone merely through the act of gaining formal independence. For Haiti, the conditions of independence from France saw the former colony forced to pay ‘reparations’ to France for its ‘lost property’ in the Caribbean. Haiti would then spend the next 120 years allocating up to 80 percent of its revenue to paying off this debt. The price of independence sowed the seeds for greater social vulnerabilities in Haiti. This explains why, when compared to their Dominican neighbour, the average Haitian is nearly 10 times poorer and more likely to be unemployed. Knowing the root causes of social vulnerabilities is critical for effective disaster risk reduction, as they contribute to the ‘dynamic pressures’ that lead to disasters with higher human devastation.

Unfortunately, the international community, including humanitarian actors, has not effectively incorporated a historical lens into its responses, ultimately to the detriment of affected populations. Haiti continues to be greatly exposed to disasters despite having received US$13 billion in foreign assistance over the past decade. This echoes the idea of ‘incomplete decolonisation’. Instead, supporting local actors would not only see money go towards those directly affected and strengthen local disaster risk reduction strategies, but it would also empower local communities to determine their own postcolonial development, helping to break the reproductive cycle of colonialism.

Discourse around disaster risk reduction has made important headway in considering how environmental hazards have been amplified by climate change, and social vulnerabilities are rightly being paid greater attention. The outcome statement from the 2022 Asia-Pacific Ministerial Conference on Disaster Risk Reduction reaffirmed that development and investment practices must change in order to properly address how climate change is contributing to increased exposure to disasters. This encouraging call for action must now be extended towards recognising the role of colonialism in shaping disasters so that disaster risk reduction strategies can more holistically address how social and political vulnerabilities were created. Until the historical role of colonialism in disasters is properly tackled, attempts at disaster risk reduction cannot fully take hold.